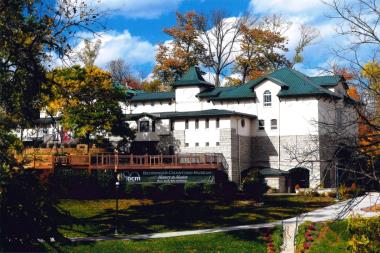 Behringer-Crawford Museum, perched in scenic Devou Park in Covington, KY, is dedicated to preserving and celebrating the unique arts, heritage and culture of Northern Kentucky as part of the Ohio Valley.

Founded in the former Eubank-Devou family 19th century home, the museum opened to the public in 1950 as a natural history museum based on the collections of William Behringer, an avid collector, traveler, diarist and Covington resident, featuring fossils, minerals, animal specimens and other oddities from his world travels.

Today it has evolved into an interactive. multi-dimensional cultural center offering  education, art, music and history to generations of visitors and schoolchildren.

Take a stroll through Behringer-Crawford Museum and you'll discover interesting facts and fascinating exhibits that tell the story of Northern Kentucky's history from prehistoric times to the present. 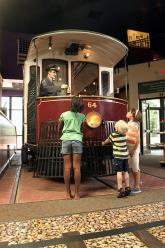 Northern Kentucky’s rail systems played an integral role in the region’s development by transporting people, goods and products locally, nationally and internationally. To learn about the impact of the railroads, enter the Rails Gallery, modelled after a mid-century railroad depot to see a rare 1924 Stewart Iron Works’ U.S. Motor Truck.

Once you have toured the displays of local manufacturers, step onto the platform of the Kentucky, the last streetcar to run in Northern Kentucky. Observe its luxurious interior and hear the personal stories of its five passengers through the decades. Then peek into the retro newsstand and follow the tracks through the museum store to view the Ray Faragher Garden Railway display, which is a miniature version of an idealized Northern Kentucky city with many Ludlow, Covington and Cincinnati landmarks. Before you head upstairs, stop at the welcome desk to see BCM’s iconic two-headed calf, the namesake for the museum’s annual community service awards and event, and see more of the museum’s early history by the stairs and elevator.

Level 2 - On the Road Again 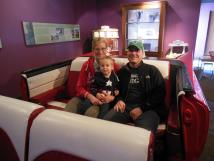 After WWII, the accessibility and affordability of the automobile changed the way Americans lived and viewed life.  Have a seat in the 1959 Buick Electra convertible and watch an original drive-in movie to learn about this change in lifestyle.

Punch up a tune on the vintage jukebox, then follow the road around the corner to discover an authentic Studebaker English horse gig from the early 1900s hanging from the ceiling. Continue along the road to find our
vintage kitchen display featuring appliances, accessories and authentic 1950s fashion.

Level 3 -Traveling Back in Time

Objects nearthed through archaeological efforts help us understand the past.  Explore the Prehistory Gallery to learn the secrets of our local geological and cultural past.  Ordovician Sea fossils, American Indian artifacts from Boone, Campbell and Kenton counties and Ice Age mammal fossils from Big Bone Lick are on display.  Upon exiting the gallery, turn right to enter the Rivers Gallery.

Level 3 - Rollin' on the River

Called OYO, “The Great River,” by the Iroquois, or La Belle Riviere, “The Beautiful River,” by the French, the Ohio River has been a means of livelihood and transportation for many peoples including the American Indians and pioneers.

The Rivers Gallery spotlights the important role the Ohio and Licking Rivers played in the evolution of river commerce and early settlement and the impact they made on the development of historical events such as the Civil War.

Explore the interactive play area for children on the riverboat Wake Robin and hear the many sounds of the river. Don't forget to grab your fishing pole and catch some native fish!

The rotating exhibits located between the Prehistory Gallery and the Devou Legacy Building change periodically throughout the year to display special artwork and artifacts and seasonal themes. Whether our Holiday Traditions@BCM train display or never-before-seen artifacts from the Behringer-Crawford Museum collection, check Now@BCM to see what exciting exhibits are featured!

On your way to the gallery, enjoy the aesthetics of our unique stained glass windows created by local artist Wolfgang A. Ritschel depicting Northern Kentucky’s heritage. The three windows highlight the region's people, archaeology and transporation.

Originally home to the Eubank and Devou families, the museum building and the surrounding land that is now Devou Park was donated by Charles and William Devou Jr. to the city of Covington in 1910 for the benefit of the Greater Cincinnati region.  With the request that their home become a library or art museum, the Devou Legacy Building opened as a museum in 1950. Currently, it houses the museum’s administrative offices on Level 4 and permanent and rotating galleries on Level 3.

A symbol of technological advancement, the historic Roebling Bridge, prototype for the Brooklyn Bridge in New York City, is an iconic Ohio Valley monument. Cross the replica of the bridge to learn more about other structures, steamboats and river disasters, as well as the history of Greater Cincinnati/Northern Kentucky regional airports. Visit the Mrs. White's Kindergarten exhibit across the stairway from the Runways exhibit to learn more about this early education program in the Whites' home in Fort Mitchell during a pause in Kentucky's kindergarten programs. Can you find anyone you know who attended her classes?

Located adjacent to the museum’s main parking lot is NaturePlay @BCM, a free and contained handicapped-accessible green space where children and their families can play, discover and engage in heritage and natural history. The area includes kid-sized log cabins and caves, a wooden replica of a flatboat, a cruise line swing, walkways imbedded with animal tracks and gardens planted with native plants and shrubs.

NaturePlay@BCM is free and open from dawn to dusk each day.  Children must be accompanied by an adult and supervised at all times.